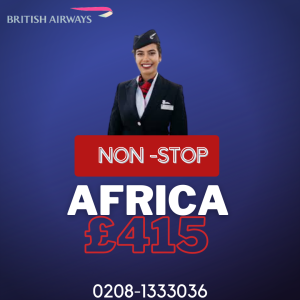 Are You Looking For Cheap Pay Later British airways flight deals ??.  you are at the right place your search just got finished. Don’t look no more. we will help you out to get the best deals possible for your trip. No matter what if you are planning to travel in a busy season or a low season. Our trained travel consultants will get your desire flights in your desired budget.

Choose & Compare Our “Unbeatable Cheap flight Prices “&Save Up to 50% On Future Trips By Booking Flights in Advance. So Why Pay More for Flights. when you can save on flight with pay later deals. Don’t wait no more as the time is ticking you are losing money on British airways  flight deals.

flight prices always fluctuate and increase they never come down as the inflation rate is getting higher on daily basis its same with flight prices as well. so its best to book flight tickets and hold your booking by paying a little deposit of GB 25 per passenger and pay balance payment in installment. you can either choose from book now pay later or fly now pay later payment option check out fly now pay later  terms and conditions and privacy policy for further information.

BA Cheapest Fares for most Traveled destination From UK :

Are you looking to Book British airways Flights but running low on money ??. Don’t worry we have got your back Pay later tickets offers you to pay in easy flexible installments within 3-10 months time period accordingly to your budget.

If you can answer ‘yes’ to these four questions, you can apply to Fly Now Pay Later

You must live in the UK.

You must have a UK mobile phone.

4.Got a UK debit card

You must have a UK debit card(not Electron or Amex).

British airways is founded on 31 March 1974. it originates from Waterside, Harmondsworth, England and has operations from UK airports mostly via its main hub London Heathrow Airport. Ba does fly with some other national and international airlines covering mostly all destinations all around the world. Since all tickets booked with Pay later tickets have  ATOLL & IATA  protection.

British Airways operates a fleet of 249 aircraft with 55 orders. British airways operates a mix of Airbus narrow and wide-body aircraft, and Boeing wide-body aircraft, specifically the 777 and 787. In October 2020, BA retired its fleet of 747-400 aircraft.it was the largest airline to operate a large number of 747 aircraft’s it even operated -100, -200, and -400 aircraft as well.

British Airways offers a number of services which you can either book online on airline`s website which is www.britishairways.com simply by using your confirmation number provided by Paylatertickets or by calling us or the airline on their UK contact number 0844 493 0787.

Most of the services are free of cost, except a few which includes special seat allocation as a number of seat quota is reserved separately by the airline which is either allocated to handicapped passengers or priority passengers who are willing to pay for the front rows seats of the plane.

Standard Economy class Ba seat pitch varies from 29″ to 34″ depending on aircraft type and location of the seat.

Heathrow and Gatwick flights have buy on board option with large range of food provided by famous  Marks and Spencer.

Keep that in Mind all items can be Purchased with credit /debit card or by using Frequent Flyer points. 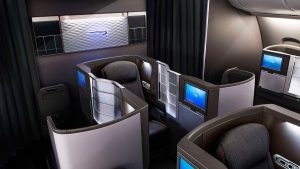 Business Class also known as Club Europe allows access to business lounges at most airports and complimentary onboard catering. The middle seat of the standard Airbus configured cabin is left free. Longer flights passengers will be given Pillows and blankets facility as well.

First Class suit comes up with a a 6 ft. 6 in (1.98 m) bed, a 15-inch (38 cm) wide entertainment screen, and in-seat power. First class seats comes with a lot of exciting features which includes free pick and drop and a lot of meal preferences.